Yesterday afternoon we went for a walk and run around the woods in Wilton about 5 miles away.  T had finished early from the garage and off we went in Vicky.  He often talks to us on these walks and it was then we heard that we were all going off in  Zygie  this weekend to get away from the bangs!  Whisky and I don’t like fireworks and there are a lot going off at this time of the year.  I wish humans kept civilised hours for letting them off but they don’t.  Here in town people let them off at any time.  Last night there were some at midnight and then again at 2pm in the morning.  We did not know what to do and so just barked and barked, it really is quite frightening for us two as they seem so close and shake the house.  Did you know that a dog’s sense of hearing is significantly greater than a human’s. Studies have shown that we are capable of perceiving frequencies about twice that of a normal human (?) and can pick up and distinguish sounds roughly four times that of humans. 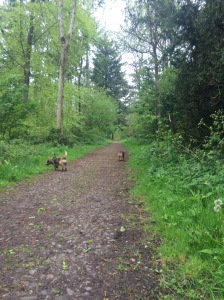 He also told us that he must finish off the blogs for the adventures we have had in Zygie over the last few months. So watch this space.

3 thoughts on “Bangs by Brandy”

Our Tour
Twernt On Tour - Motorhoming in Europe