Today saw Kaz and I, minus the Boys, trundle west in Zygie.  First thing this morning I dropped The Boys at Clearway Kennels where they were going on their mini holiday.  This is the first time we have gone away in Zygie without them and I think it will be rather different for us all.  They were no bother at all at the kennels and went off straight away with the handlers.

As usual we had a late start from the farm even though I had filled up with fresh water and checked things over the day before.  It is so easy loading up there without passing traffic bothering us and even if its wet and blowy we can still upload under cover.

Our first port of call was Tyntesfield a National Trust property near Wraxall.  Unfortunately when we got there it was too near to the house closing time for the day that we decided to leave it for another occasion.  We did though have a leisurely pot of tea and cake and a walk around part of the estate.  However our drive there was really very, very pretty going via Chew Valley passing Chew Valley and Blagdon lakes along the A368.

It did strange walking about without The Boys – but restful!

Moving off from the carpark I wondered why The National Trust do not cater for MoHo owners with an allocated stop over site somewhere on their estates, I’m sure they could make a killing.

It was surprisingly not far to our overnight stop in Pilning so on the way, just off the motorway junction at Cribbs Causeway, we popped into Morrisons.  It made a change for us as we do not have such a store close to us.  I took the photo below of a painting hanging inside the store which reminded me of my time at Bristol University.

Concorde taking off from Filton

Finding the pub was easy and turning into the large carpark we spoilt for choice.  The next thing I saw was the Wadsworth pub sign which was delightfulI.  Unfortunately on checking in with the bar staff I noticed they did not have much of a range of W just 6X.  It also felt that it had seen better days but these days its great to find one open. 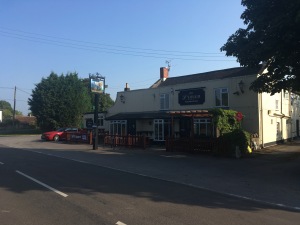 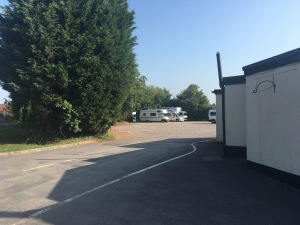 sandwiched in the carpark

That night we dined in the bar area early and went back to Zygie and played cards.  Sometime later we were joined by another two vans who kept themselves to themselves.

The next morning we set off in bright sun.  Infact it stayed that way all the way over to The Gower and what a lovely easy drive until we got near the camp site and then it got interesting.

Shortly after we got set up A arrived in her new very orange campervan with a grin all over her face, she is so chuffed with it!

I don’t know where the time went but there was lots of chatting, tea drinking – all without The Boys 😦  Actually it was probably a good idea not having them as there seemed to be loads of dogs about, W and B would have had a field day.

In between the chatting and the tea drinking A, supervised by K, put up her newly delivered to the site drive-away awning! 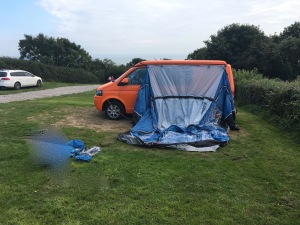 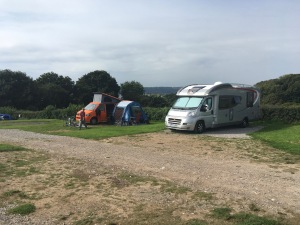 the Orange and Zygie

into Wales after still paying £5.50

After a bit of a laze around we set off for a walk to the pub.  Directions either not being fully understood or followed this took much longer than planned.  It was a circuitous route following the coastal path which we seemed to make twice as long!!! 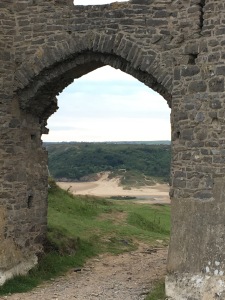 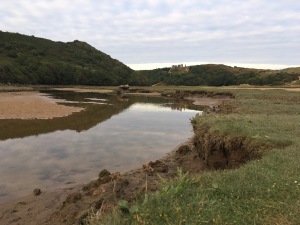 The pub looked really promising but that was all, my Trip Advisor comments says it all.

Today we were joined by F who had trained it from Bristol to Swansea and then cycled!

After a cuppa we all set off in The Orange to Rhossilli Bay for them all to try the surf out.  When we got there K was persuaded to try belly boarding.  I am totally adverse to cool sea water! 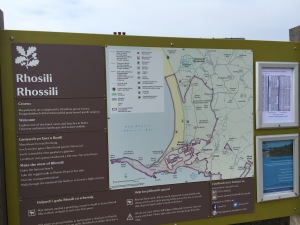 NT Map of the area 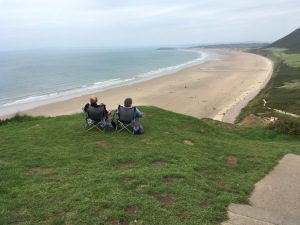 its a long way dear 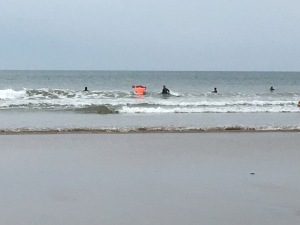 sea time for some 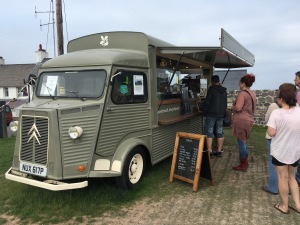 my chosen stop off point! 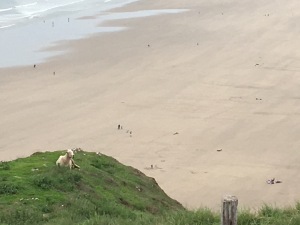 lonely goat from Sounds of Music

After a shared breakfast under their new tent/canopy we went for a last beach walk below the camp site. 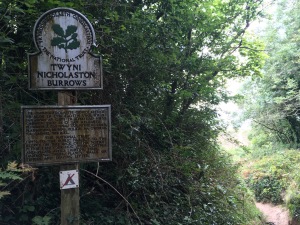 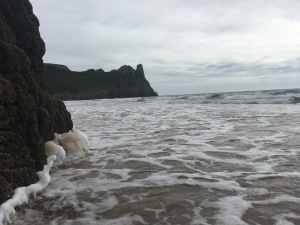 random wellies seen on way back

On our return we left the gals to do their thing for the rest of the w/e as they were staying for another night.  We would have liked to stay too, in fact we had had to pay for the three nights (thats a Welsh w/e for you) but K had to be back at work on the Monday.

Another glorious sunny day and we enjoyed the drive home testing the newly fitted radio and speakers, a much better reception and sound!  Just after the Newport turning we got passed by a lot of the Tour of Britain team cars exiting Wales for the next stage.

It is a real pleasure to drive Zygie, just setting the cruise control and watching the world flow by is so nice.  I set it to just under 60mph which slightly avoids interacting too much with the trucks.  Some though have theirs about the same so the catching up and passing always proves interesting (and fun for me?!)

We are both falling in love with Zygie again as it did feel she had been let down by Southdowns and Adams Moray in Portsmouth.  Shortly after we get back though she goes off again for rework – respraying of the rear panel, fingers crossed all goes well.

No nothing to do with driving Roxie about more about getting dirty running around!

Friday – Arrived at the Caravan Club site at Tredegar House in fine weather having had a pleasant drive down. I am finding driving Roxie such a pleasant experience and a great way to see the countryside, something I had forgotten about.  END_OF_DOCUMENT_TOKEN_TO_BE_REPLACED

This was the day that we moved our daughter, Alex, from Cardiff to Salisbury at the end of her PGCE course.

We cannot get into the barn to release Roxy until after 9am. This may seem rather restrictive but we are learning to work around it. Anyway the site, both inside and outside, are both safe and secure. As we wanted an early start I drove there the night before to leave her outside. END_OF_DOCUMENT_TOKEN_TO_BE_REPLACED