This was the day that we moved our daughter, Alex, from Cardiff to Salisbury at the end of her PGCE course.

We cannot get into the barn to release Roxy until after 9am. This may seem rather restrictive but we are learning to work around it. Anyway the site, both inside and outside, are both safe and secure. As we wanted an early start I drove there the night before to leave her outside.

Filling her with 30l of diesel in Salisbury we headed off up the road out towards Cardiff. This was the first long run Kaz had made in the van and she was delighted with the comfort and high seating position enabling us both to see views that we had previously missed in the car. Both the dogs were a little restless not used to being in such a vehicle before and not also not looking out of a side window. 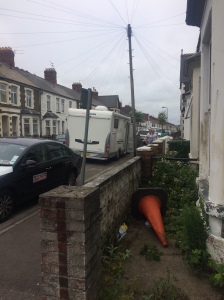 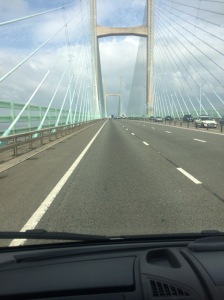 Eventually the Severn Bridge was insight and at the toll booth I was surprised that we only had to pay the rate for a car! Following the SatNav we soon managed to find where Alex was living and backed down the culdesac and outside her shared house.

Thanks to the enormous garage the two bikes and numerous boxes filled the space easily. Inside the wardrobes were filled and more boxes and surf boards were laid out. Meanwhile the dogs gave vent in Alex’s car! Just before the rain set in we set off back to Salisbury and the lockup.

Just over two hours later we were off loading her goods in the lockup, thankfully in sunshine. 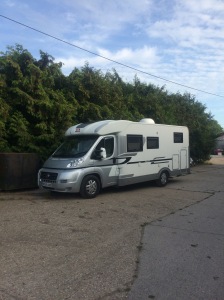 Once completed I drove Roxy back to the farm and put her to bed.

Not checked mpg yet but going by the fuel gauge only I would say we used up the fuel I put in.