We arrived at the Somerset Arms, Semington just before 6pm.  This is another Brit Stop that we intended using for the Sunday night on our way up to Hereford. This pub is not very far from where we live and after this visit we will use it again.

Our Brit Stop Pub for the night!

What is great about this stop is that it is close to the Kennet and Avon Canal.  So shortly after we arrived we went off to explore – the dogs and us had a great walk.  We both agreed we could quite easily live alongside a river, canal or by the sea somewhere in the world. 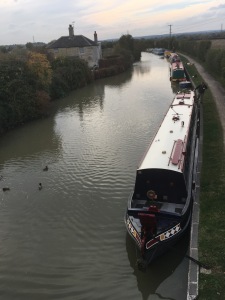 I had picked this pub so that we could enjoy and early evening Sunday Lunch which they serve until 8pm.  It turned out to be brill as well as the real ales and wine that we tried, even taking a pint and a glass of vino back to Zygie afterwards so we that could watch a video in with The Boys.

Not a centre white line in site

In the morning I walked along the canal in the opposite direction with The Boys in tow, or was it the other way aroundwhile Kaz packed up.  As it was only about a 90 minute or so drive to the campsite we were there shortly after 3pm.

We fuelled up just outside Marlborough getting a 3p per litre discount by spending more than £15 in the shop – two bottles of fine white wine discounted again, did the deed.

We had chosen to travel along the M4, over the Severn Bridge and up towards Hereford using the A449 and A40.  The cost over the bridge was a lot less than I thought it would as we were classed as a car on this trip! 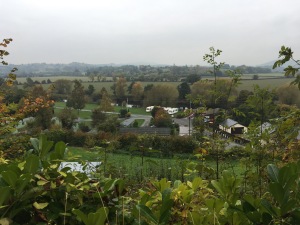 Campsite from the woods

A very warm welcome on arrival at Lucksall Caravan Club site set the tone for the w/e.  With a corner plot on hard standing and by the River Wye, it was bliss.  I went off with The Boys while Kaz got everything inside sorted for our 3 day stay. When I returned I wrapped up Zygie with the external thermal blinds as I could tell it would be a cold night. So it was but The Boys whimpered a bit in the early hours so popping on the heating everyone settled down again. 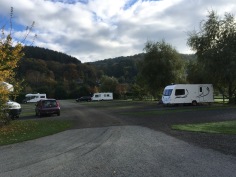 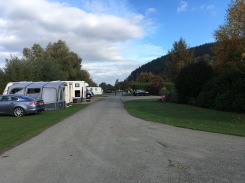 Lucksall site with the woods behind

Our spot was next to an Autotrail Meet and they were a very friendly lot even though Zygie is a Burstner!  They all moved off towards the end of the week as most of them had plans to go to their AGM at Cheltenham Racecourse.  Some we talked to were off to Europe the following week eventually spending our winter months in Southern Spain!… jealous?

Over the next three days we spent lots of time walking in the woods behind us and along the river.  Work for Kaz was always present as she had a lot of preparation for the next term.  We did see a White European Pelican (according to Google)  in the opposite field, quite a rare siteing apparently. During our walks one track took us through the apple orchids and down into the next village – and the the Moon in Mordiford pub.  Of course neither of us could resist a glass or two of cider.

We now have WiFi (or WeeFee as the French pronounce it) full time now care of the package I purchased and fitted the week before.  Sadly we discovered the battery only lasted about 5 hours before recharging.  I will be fitting this into the 12v supply soon.  It was great to be connected and Kaz was able to link into the school site without any problems.  I on the other hand just love You Tube, its like a big visual library to me. 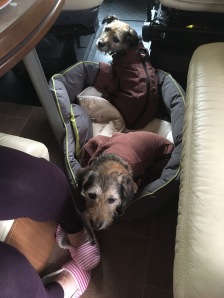 We have also had fun with the Tv too.  Fun, frustration more like.  Our previous satellite on the roof of Roxie was a KvD and was the dogs doc dahs, being quick and with self tracking.  This Maxview is slow and has to be directed manually both up and down and around.  Anyway we are getting quicker at the set up but I am never totally convinced it is going to work.  Well on this occasion it did and so Kaz was able to watch her favourite nightly programmes – as I did too.

Overall Lucksall is a great, well thought out site that is kept very clean and tidy.  The hot water, in the exceptionally clean shower blocks, was really hot, making having one after a cold damp day delightful.  I can imagine it being very popular in the summer being on the river with so much watery things happending, fishing canoeing etc.  One day a chap set up all his gear opposite us, ready to do some serous star gazing. If made interesting watching but decided I would not join hin later. Yes the site had signs telling you what to do and what not to do in abundance but they had the right effect either way, so there.

On the Thursday afternoon we disembarked our bits and bobs at the farm.  It is really useful having undercover storage both for Zygie and us.  Being able to do all this kind of stuff in a dry open space and out of the cold and wet is certainly an advantage.

2 thoughts on “Half Term Break”