While The Boys had a holiday weekend with our neighbours we went off in Zygie to the Motorhome show at the NEC Birmingham.

During the Friday I had taken The Boys for a long walk up by the farm and had also loaded up Zygie. Picking up Kaz from work we drove up to the Hare and Hounds on the Fosse Way which we were using as a Brit Stop.

Arriving early evening it looked as though we were going to have a nice time as the old pub was very quaint being built in Cotswold stone.  However just as I was locking up we heard water gushing from underneath the van.  I immediately dashed inside for a torch to check this out.  At first it looked as though it was coming from a burst pipe.  I tried taping this up with some Duck Tape but it still kept on coming.  Checking again around the other side of the rear wheel I could see the water was exiting directly from a down pipe.  It was then it dawned on me that Zygie had felt it was too cold and had made the decision to ditch its water!  I knew where the tap was but the first attempt at turning this off failed.  Success at the second attempt and with change of clothing we were off to the pub to warm up and have some grub.

Sadly the experience was not a great one as the owners were not that friendly and the food was just ok with the beer off so it was an early to bed night!

Saturday morning we were off to the NEC.  I do enjoy driving Zygie especially on long runs when its overdrive comes into play. The motorway traffic was a bit of a nightmare with long queues so we arrived later than I had planned.

This was not the first time we had been to the show and it was just as we expected with a similar layout and stands. I had a list of people I wanted to chat to so we had a mission.  We visited the Burstner stand and were pleased to note that there was nothing that the new models had we liked or wished for in Zygie.  We spent a lot of time speaking to Adam and Sophie on their Motorhome WiFi stand at the end of which we came away with a 4G Pack.  This consists of a 4g low profile roof antenna and a Huawei E5577 MiFi.  The Fiammi stand also saw my wallet slightly lighter.  Kaz also bought some towel bags from The Doggy Bag Company for The Boys. We now put them inside these when they are wet and dirty having been out walking / running in the rough – most of the time.  It was a long afternoon, being slightly noisy and hot inside so we were pleased to catch the bus back to Zygie stationed on the onsite camp site provided by the CCC.  I felt it best to book the hard standing parking area over the gravel one but as it rained heavily all night I discovered in the morning that we were surrounded by rain water, although being hard underfoot.

Just before 11 we pulled off, got rid of all the stuff we did not need and headed for the motorway.  A very easy and pleasant drive home whilst Kaz did some school work behind me at the table. – strapped in of course.  We both said we had missed The Boys but this trip was easier without them. 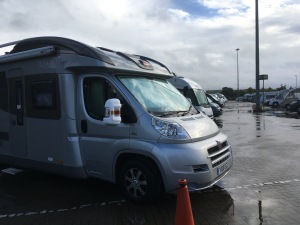 Next job – get fitting and drilling !!