We visited the end of the year Motor Home Show at Shepton Mallett predominately to see the accessories on offer and to have a nose around.  This all proved very successful which resulted us in deciding to purchase the “Gas It” system for the van.

So after a couple of calls to Dominic at Avon Autogas Ltd in Bedminster, Bristol ( www.getgas.co.uk ) arrangements were made for Roxie to have it fitted.  The garage is not large enough to have work completed on site fitting so the mobile fitter either completes the work on his drive or a local carpark.  Sounds rather odd I know but it works.  I also realise that fitting the system can be a DIY job but I chose to use the discount I was given to have it done by an experienced fitter.  So while I took the boys for a walk around the local park the job was jobbed.

When we returned it was almost time to leave but I took the opportunity to buy some european gas fittings ready for the future.  Should we ever sell the van it is possible to return the van to to its previous gas system with just leaving the connector in place rather than a hole.

All done it was a run back home. I will to refill with LPG and test the system on another day out.

Ron fitting and shadow of me! 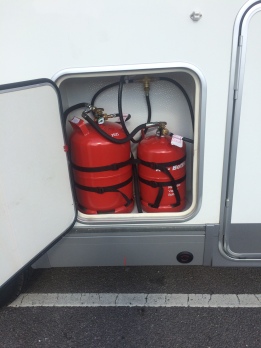