A few days away from the city is a welcome break for both of us.  Salisbury is a super place and living close to the city centre is nicely convenient, with everything on our door step.  At times though we crave for the open spaces giving a greater sense of freedom which is why I love to walk The Boys on Salisbury Plain whenever I can.

A break in our routine is exactly what we needed. We decided not to rush around to leave but accept time in slow mode so it was not until 11am that we left the farm in Zygie. I had walked the dogs, half filled Zygie’s tank with fresh spring water and Kaz had stored our clothes and food away.

Next stop was the local BP Marks and Spencer garage on the edge of town.  Having a 10p off a litre was an offer not to be missed I thought so filled it to the brim.  I do wonder when I fill up like this if he has a hole in the fuel tank for it seems to go on for ever.  Anyway I will definitely work out what miles to the gallon he does.

We bimbled down south-west stopping only the once when we were in Devon to have a bite to eat at about 2.30.

It really is difficult in this country to find somewhere convenient to stop unlike the aires in France which have seating, open grass places and sometimes BBQs.  They are not always tidy places and sadly this one we stopped in was disgusting, even the dogs seemed pleased to get back in the van – why do people feel it is correct to litter the countryside in such a manner.

It started to shower slightly as we got closer to the coast but we remained hopeful for the next few days ahead.

We found the site about 4pm but initially passed the Certified Location (CL) post and had to turn around.

The site entrance, off the main road, was rather narrow which then turned left up a steep climb which took me by surprise but Zygie managed the incline with no problem.  The torque of the engine always amazes me.  Once at the top the view gob smacked us both.  Plot 4 (of 6) was already marked “taken for Mr Armstrong”. 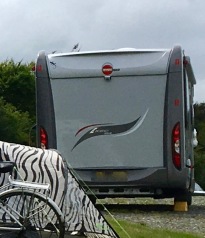 yellow Fiamma blocks in use – first time in ages

Although set out as a hard standing and being slightly flattish it still required the ramps, something which we have not used for ages.

looking back to main road

turning to go up 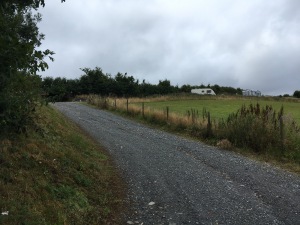 through gate and up

blocks needed for this caravan 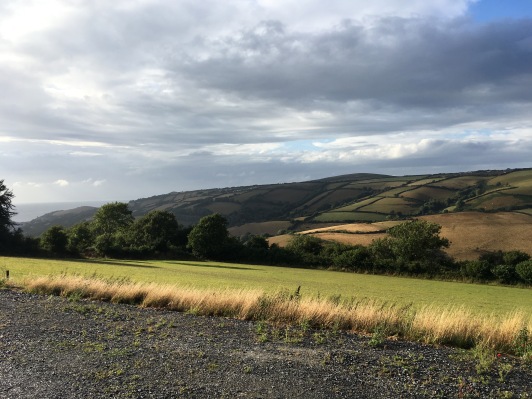 It did not take us long to get level and hook up the electric and top up the water levels – then guess what, it was – “drinks ‘o’ clock time!” 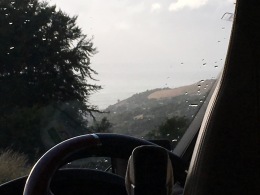 As we sat drinking our wine the rain returned but then suddenly cleared and we watched the sun setting over the Bristol Channel.  The colour of the sky was amazing and kept changing every few minutes, matching the sounds of the rain on the roof.  We promised The Boys we would take them out the next day for a walk!

It rained over night but thankfully no thunder or lightening to frighten The Boys – and us.  We had a lazy breakfast and as we finished the rain dried up and the sun tried hard to show its face.

Walking the Boys down passed the lower farm buildings and along the lane into fields facing the bay at Combe Martin it all reminded us how peaceful the countryside can be. We eventually found ourselves in a field overlooking the Wild Life & Dinosaur Park in the valley below.

Boys enjoying a run around 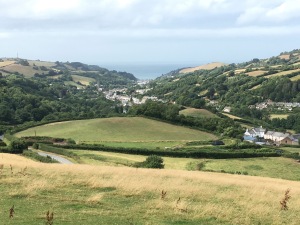 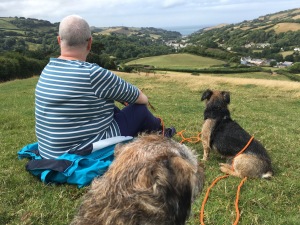 listening for the dinosaurs

That night we watched, once again, the dramatic clouds passing across the bay. 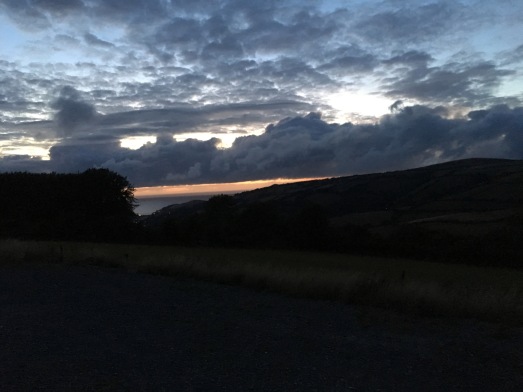 Another pleasant sleep having counted lots of quiet sheep floating by.  It seemed it did rain during the night but I was not fully aware of it. Weather was overcast and our view was interrupted by sea mist passing by first thing but this did not stop a plan being formed. We decided to go for a drive up to the coast and make a circular route back.  We have not done this many times before so it seemed different for me to only part pack leaving the EHU cable out and with the blocks in place ready for our return.

Our route took us down to Combe Martin and along to Hele Bay, passing through Ilfracombe which did look rather sad. Continuing touring west our destination was Croyde Bay and Baggy Point run by The National Trust (NT).  We eventually managed to park up in the (NT) car park needing to go in via the exit rather than the entrance as it was so narrow.  A walk along the coast line with The Boys, cleared away any thoughts that the UK is not a wonderful holiday destination, especially on a sunny day. 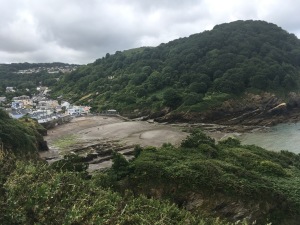 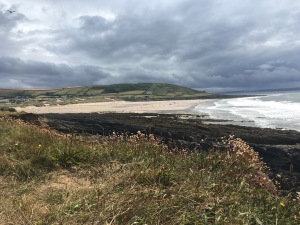 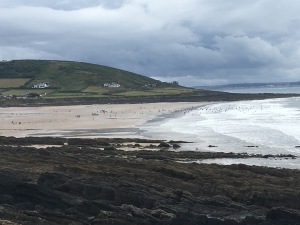 Baggy point on the right

The Boys wanting to get to the beach

Then it was down to Braunton, skirting Barnstaple, onto the A39 going north again and “home”.

We had today planned to go down to Plymouth, to visit some friends from the old days and stay at a Brit Stop just outside Saltash.  However when we had just left home we learned that they were in Scotland so scrubbed that idea and decided to move back east.

So after a short walk around the site with The Boys and a nice breakfast we cleared away and off we went.

Our route east took us over Exmoor which we had crossed earlier in the year.  Although I felt I knew the roads I was still rather cautious on the narrow sections. However that did not stop a Range Rover clouting our off side wing mirror when he cut the corner on a tight bend. It caused the unit to smack the side window hard and noisily; this resulted in the glass falling out. Thankfully they can be pushed back in which I did shortly after the incident, when we were able to find a suitable pull in!  The other guy never stopped so I do not know what happened to him but his expression of horror was one I can still see as he realised his error.

We did drive down to see the Torr Steps Woodland but the car park was full and very busy with people and dogs.  So we turned back up onto the wider road and called into  Liscombe Farm Ice Cream Parlour for a delicious ice cream. 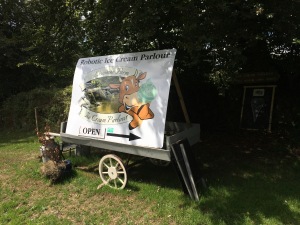 This little stop proved very educational as the three young school girls managing the shop told us all about the farm, the equipment and the cows.

All the machinery have been given names with “R2D2” cleaning up after the cows as we sat and watched the milking done by “Lilly”! 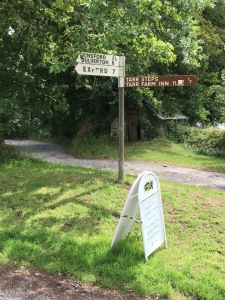 Leaving the farm we drove for about 2 miles to the B3223 on a road (track?) which was no wider than Zygie quite an experience and thankfully we did not meet anyone coming in the opposite direction but the sides did get a little bruised.

gathered a few twigs along the way

The road down into and through Dulverton, on the B3223, is always tight and on this occasion it was no exception.  A US Parcels delivery van parked up and pulled in tight to the side proved too much for us and we and everyone behind had to wait for the driver to return and reverse backwards to allow us to pass – we are after all 2.83m wide.

As we were travelling along The Boys told us they needed us to stop.  So we pulled in for a short walk break in the wooded area at Highercombe.

water stop for The Boys 1

Finding our evening site was easy being just off the main road.  I had rung ahead earlier in the day so I pulled straight in, now it was just a matter of which way.  We were well met and soon knew our way around and where everything was.  Hooked up we had a walk around the lakes with The Boys.  It was fascinating to watch the fish leap up trying to catch the flies. 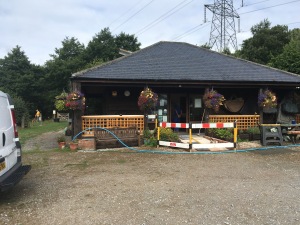 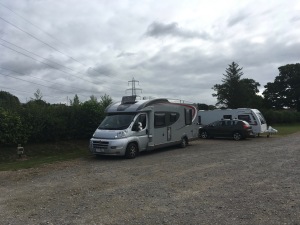 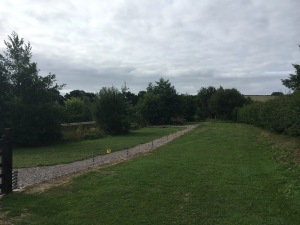 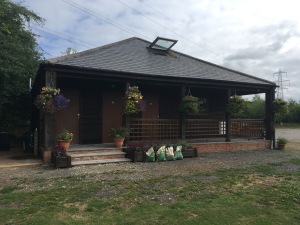 We did think initially that we might stay for two nights but after our walk around that changed. Although the site was clean, tidy and very quiet neither of us enjoyed the closeness of the electricity pylons (see photos) which fizzed all the time. However this did not stop us obtaining a tv signal so we were able to watch the evening programmes for a change.

A quick final dog walk in the morning, breakfast and then we started on our way home.

Quite an uneventful trip back really using the cruise control via the M5 to Taunton and then on the A303.  We took a route towards Yeovil for a change onto the A30 passing our old pub The Grove Arms, in Ludwell.

Later with everything packed up at the farm we went out to celebrate our wedding anniversary at The Bat and Ball at Breamore.

For some time now the radio reception in Zygie has been rather inconsistent.  Hopefully to stop this and also improve the sound quality I have had fitted a new DAB radio and more powerful speakers.  Absolute5, audio upgrading specialists, based in Amesbury carried out the work in a couple of hours.  We have not had a chance to test it fully yet but we will see how effective it is on our future trip to North Wales.

2 thoughts on “A North Devon Escape”