This year so far has not seen us use Zygie much.  Problems with the repair garage, which incidentally have not been fully resolved, and some major family health issues ,which are still ongoing and will be for some time, has seen him mostly square wheeled inside at the farm. Even The Boys have not gone unscathed with Whiskey having a costly operation on his leg (thank goodness for Pet Plan) which meant numerous visits to the specialist vets, Southern Counties Vets in Ringwood.

So all we have managed so far are just days out or a few days away.  We have decided that France and Europe are not on the agenda this year which is a shame but this happen next year.

Thus I have not been entirely inclined to complete the blog for a while but feel today is the day to put fingers to the keyboard, get something out there and add some photos at least.  I always intended this to be a record of what we had done in Zygie and not necessarily a blow-by-blow story book.

I have even had some doubts about Zygie over these last few months.  After being away from us for so long and with continued problems I felt I had lost my attachment.  We spent a whole weekend thinking about this together and even took time looking to see what alternatives were out there.  The outcome was that we could think of no good reason why we should part exchange Zygie, he did in fact tick so many of the boxes for us that others did not.

To stop getting house bound and stir crazy we chose a sunny day and took Zygie out for a drive.  With the fridge topped up with food and drink we were off.  Just a round trip from the farm and back, stopping off in Savernake Forest for a doze in the shade! 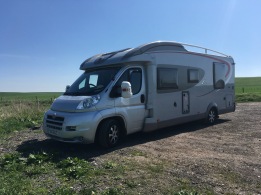 Zygie on Marlborough Downs near Devizes 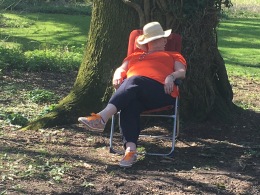 Dozing and Dreaming in Savernake Forest

Even though the mechanism for the folding bed was not working we decided to go off a for a couple of days.  We stopped off first at The Lamb and Lion, Hambridge, Somerset.  This turned out to be great stop over with some lovely food and drink sitting in the redecorated bar next to the fire which was rather hot place to sit!

Next day we drove west to our CL, in Chittlehamholt, Umberleigh, Devon, which we had hoped to have gone to earlier in the year.  This site is quite a little gem. All plots having hard standing, electric and water facing a sloping field to walk the Boys.  The shower block was excellent and were exceptionally clean and tidy and even had freezer for customer use.

We did not venture from the site apart from a short dog walk far as we just needed to chill which we were able to do here easily.

On our way back we drove over Exmoor National Park stopping at Winsford Hill- what stunning scenery on such a lovely sunny day. 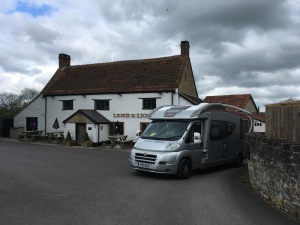 leaving the Lamb and Lion 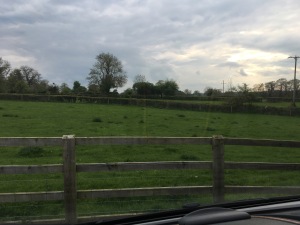 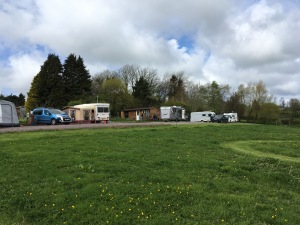 parked up at CL 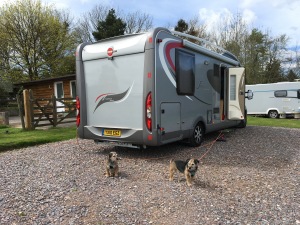 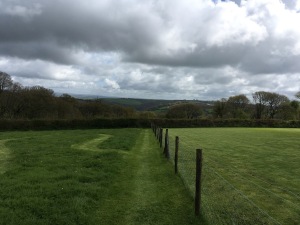 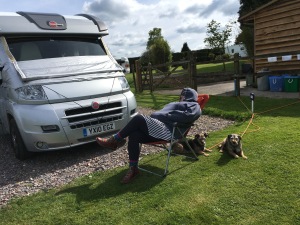 sunny but a little chilly 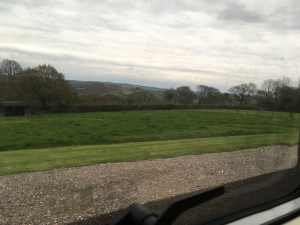 side view from Zygie 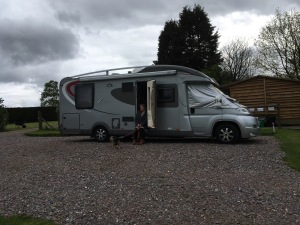 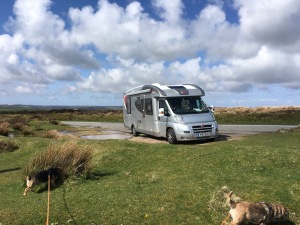 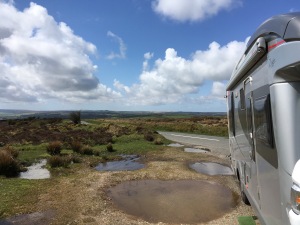 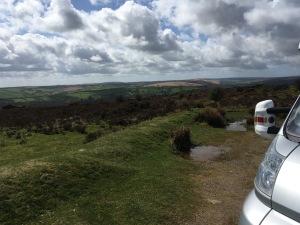 A sunny day, the Boys needed a walk and we had been stuck inside for years!  Well not quite but we did want to see the countryside and there’s no better way of seeing it than from a MoHo. It was such a peaceful stop and a lovely walk too.

So off we went in Zygie across the New Forest, by Fordingbridge, which is so close to us. 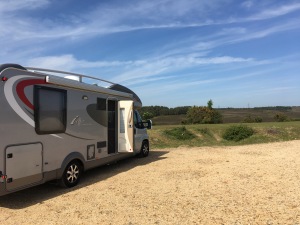 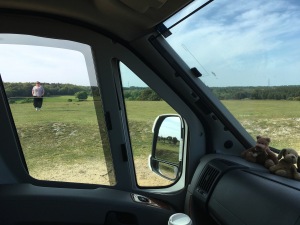 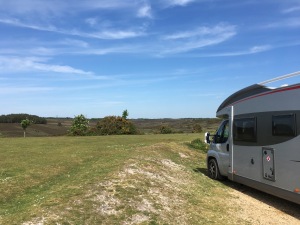 As the mechanism to the rear Queen bed has not been working today we returned to Southdown Motors in Portsmouth to have the broken part replaced.  This has been on order from Germany for the last 6 weeks.  This time frame appears to be the norm but I do not understand why that should be.  We also showed them the poor paint spray work on the rear panel.  They  admitted it was a poor job and agreed to have this redone at a later date – yet more time away! 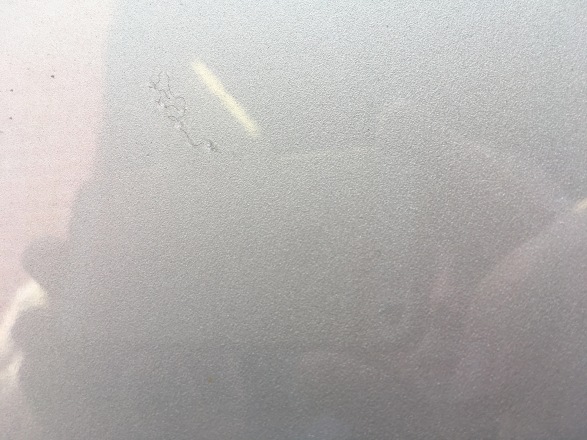 We eventually escaped from the garage after nearly two hours, my faith in this place is sinking after every visit!

Popping into Tesco’s at Hayling Island junction for fuel and w/e supplies we were pleased to be getting on the road once more even if by now it was the rush hour traffic!

Our first nights BritStop was the Partridge Inn, Singleton which was not very far away but off the main roads in a lovely village.

wedding tent for the next day

our Dutch friends for the night

tucked away around the back

We had phoned ahead and when we arrived we had a very warm welcome. It was nicely quiet but we chose to eat in Zygie instead of inside the pub restaurant.  Having ordered our meals and had a quick pint I returned to take the Boys for a quick smooch around the garden and the wedding tent.  This was being prepared for the next day for the landlady’s son!  Shortly on my return the land lord brought out our food, how nice was that.

We were joined during the evening by a Dutch couple who went for a walk and then bed. The next morning they asked us where they could deposit their black water, seems they thought it would be just as easy as in europe – nope! We gave them the address of the CL that we were going to which was in the same direction that they were going and off they popped.

Another quick walk for the Boys, some breakfast and we too were off.  It was an interesting drive back in the direction we had come passing Arundel and Goodwood.  On a country lane we hit a bump which made the fridge door swing open (Ok, I own up, I had forgotten to lock it!!!).  I was able to pull in and tape it up with K holding it in place.  I then set about straightening the top door pin against a wall with a hammer, unscrewing and then re-screwing the hinge plate.  It worked but lesson learnt!

Marden Bow Hill Farm, the CL were we staying turned out not to be a farm but a document storage site, thus it was extremely tidy, clean and well laid out.

We had previously booked our site so we knew where to go.  After a slight debate which way to face, as usual, I set out the awning, table and chairs and of course the chilled white wine.

tables and chairs out

and of course white wine

down to lower two plots

This proved to be a wonderfully quiet and peaceful site with no kids just birds and the occasional rambler. The shower block was clean, tidy and close, it even had a washer and spin dryer.

Once again we did not venture away from the site just pleased to be on our own.  We had chosen a corner plot but on walking the site later the lower two had the most beautiful views down to the Solent and across to the Southdowns.

On one of these trips I must work out what MPG Zygie is putting out.  I did not even take down distances all the way through these trips – slipping.

Today I fitted some small wooden boxes inside the dining area to hold the Tv controller and satellite finder etc.  I used Ikea boxes cut to different sizes. 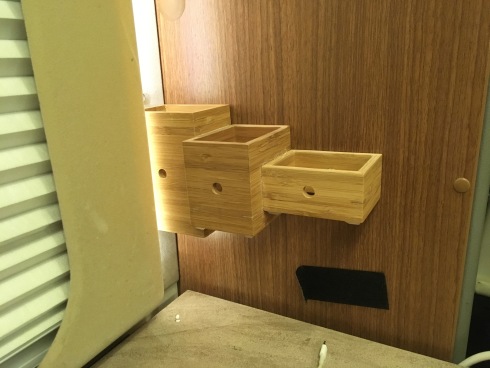 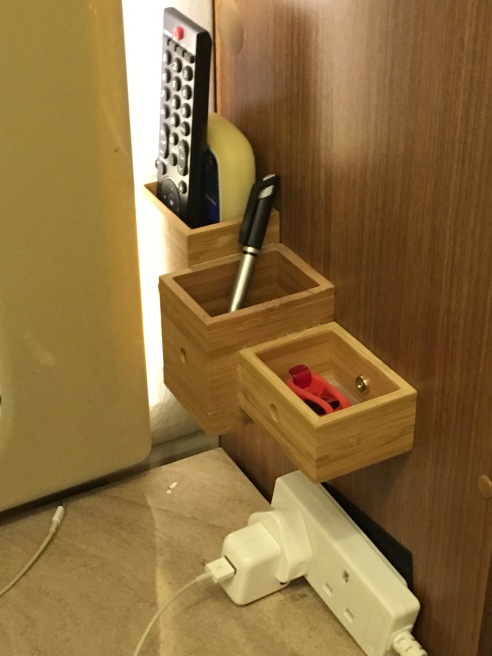 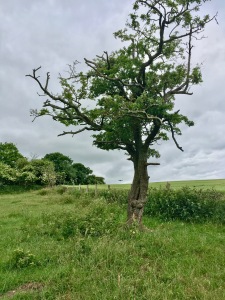 Herky Bird low down behind tree

Took the Boys to the farm for a walk and took these two photos.  In one you should be able to see a C130 Hercules Transporter doing circuits and bumps at RAF Boscombe Down. 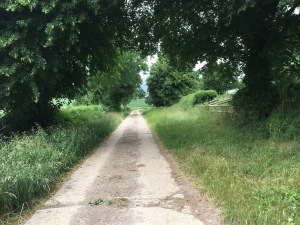 So here we are then – up to date at long last.  Next event is that Zygie is going in for his MOT and service at Haynes Garage, Lopcombe Corner. A whole year gone by, it does not seem like it. We have a couple of trips after this so watch this space! 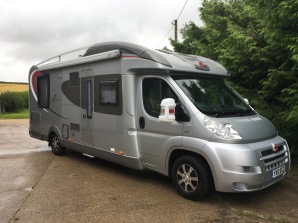 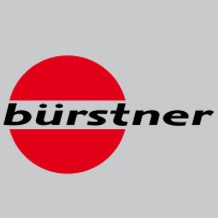